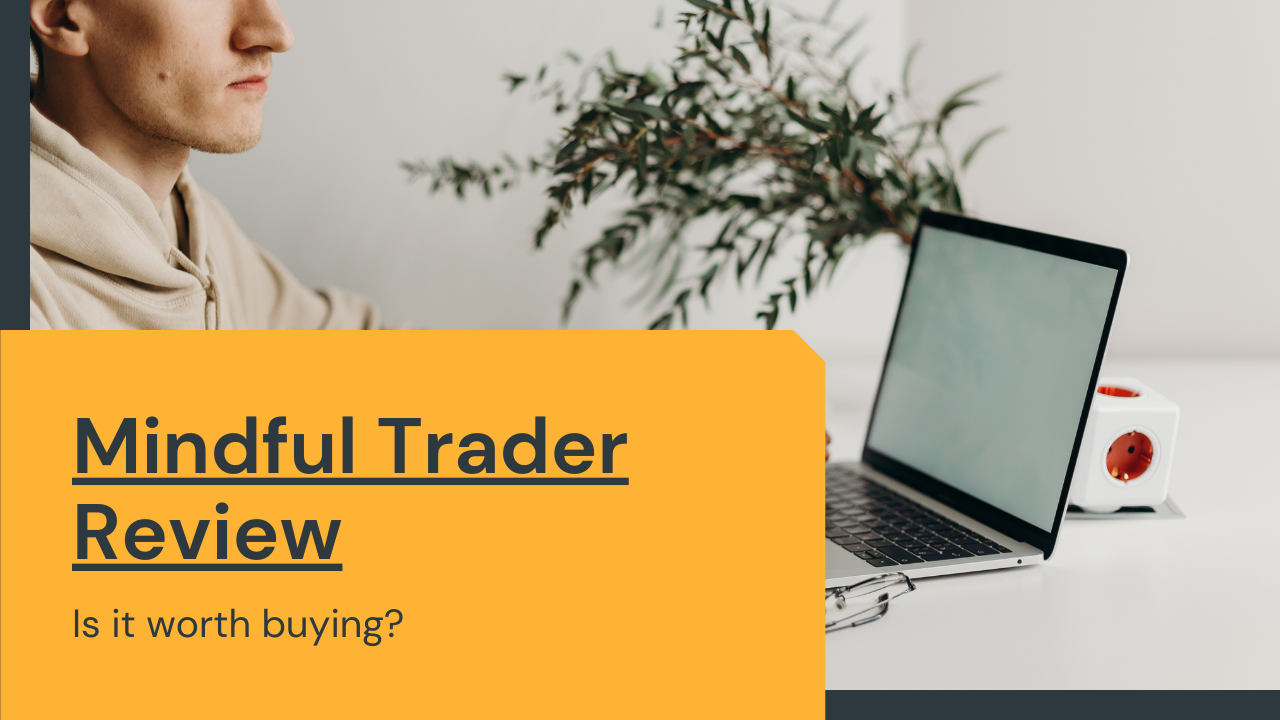 He makes some big claims about his past performances but does Mindful Trader live up to the hype?.. or is it another trading scam?

You'll get an answer to that in this review.

I'll cover all aspects of this program and you'll see everything you need to decide if it's right for you.

This includes a look at price, overview of what you get, a look into Eric's past and more.

Do I recommend? Not really

Summary: Mindful Trader doesn't quite live up to the hype in my opinion.

Apparently the creator back tested his strategy from 2000 to now and showed huge returns.

However, since launching Mindful Trader in late 2020 his returns have been slightly below average (around 8%).

Because of this I'd hold off on joining until the returns are higher.

Better Alternative: I've reviewed all the best places to get stock ideas. To see my #1 recommendation (which is extremely affordable), click below:

Is Eric Ferguson A Scam Artist? 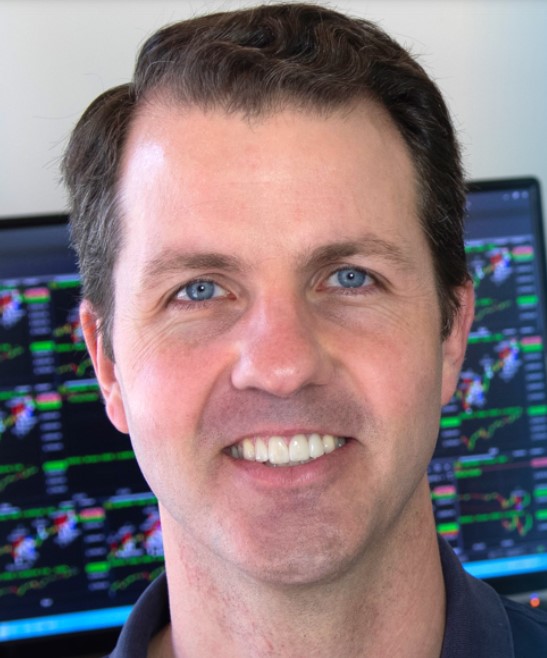 Eric Ferguson is the creator of Mindful Trader.

To be honest there's not a ton out there about Eric from third party sources or anything like that.

Everything out there about Eric basically comes from Eric.

It's always good to be skeptical of the claims someone makes on internet.. I've encountered many scammers in the trading world (doesn't mean Eric is one, though).

According to Eric he got a perfect score on the math section for his SAT's and was valedictorian of his high school.

He later went to Stanford and graduated with a degree in economics.

In order to show off his credentials he notes his work is published in Money High Street.

However, that website is basically dead and doesn't seem to be anything special.

What Is Mindful Trader?

Mindful Trader is the service Eric started in November of 2020 and focuses on swing trades.

Swing trading is when you buy and sell a stock in a short amount of time.. usually less than a week and sometimes on the same day.

This is a legitimate way to trade but it is risky and has a HORRIBLE success rate.

80% of people that trade online end up losing money.

For swing traders the number is 95%!

Swing trading is very research intensive and will take a lot of time to master.

This isn't a sit back and watch strategy.

Additionally, besides trading stocks you'll also get picks for trading options and futures.

What Do You Get With Mindful Trader?

Here's a look at everything you get:

You get stock picks every day in the morning.

Eric is from California so you can expect the picks everyday at around 6:30 A.M. Western time (9:30 if you're in the Eastern time zone).

Typically you get around 3 picks a day with information on why the trade will work.

This includes information on the entry and exit point.

Here's an example of some trades he made recently: 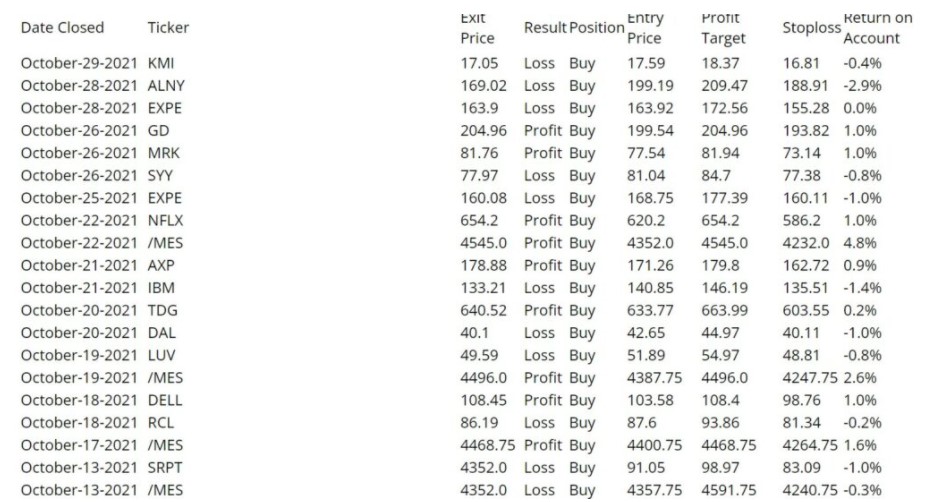 As you can see there was actually more LOSERS than winners in this set of 20 picks between October 13th to October 29th.

In addition to live positions you'll also get access to trades that could be made in the coming days.

This watch list monitors various stocks and they have potential to be good trades.

Most of the trades that actually happen will appear on this list.

I'm guessing that most people who sign up for Mindful Trader just want to get daily picks.

But there's education as well.

The training teaches the strategy that Eric uses to pick trades so you can do it on your own.

This involves education on stocks and options.

In addition, your membership with Mindful Trader comes with direct email support and chat with Eric.

Eric is a helpful guy and if you ever have an issues you can just reach out and he'll get back to you.

I've reviewed the best places that provide these. To see my favorite, click below:

Back testing is when you test your trading strategy against the previous market.

I know this confuses some people and Eric is constantly talking about his back testing results.

What Eric did was test his strategy against the market for the last 20 years.

Here's the results he got: 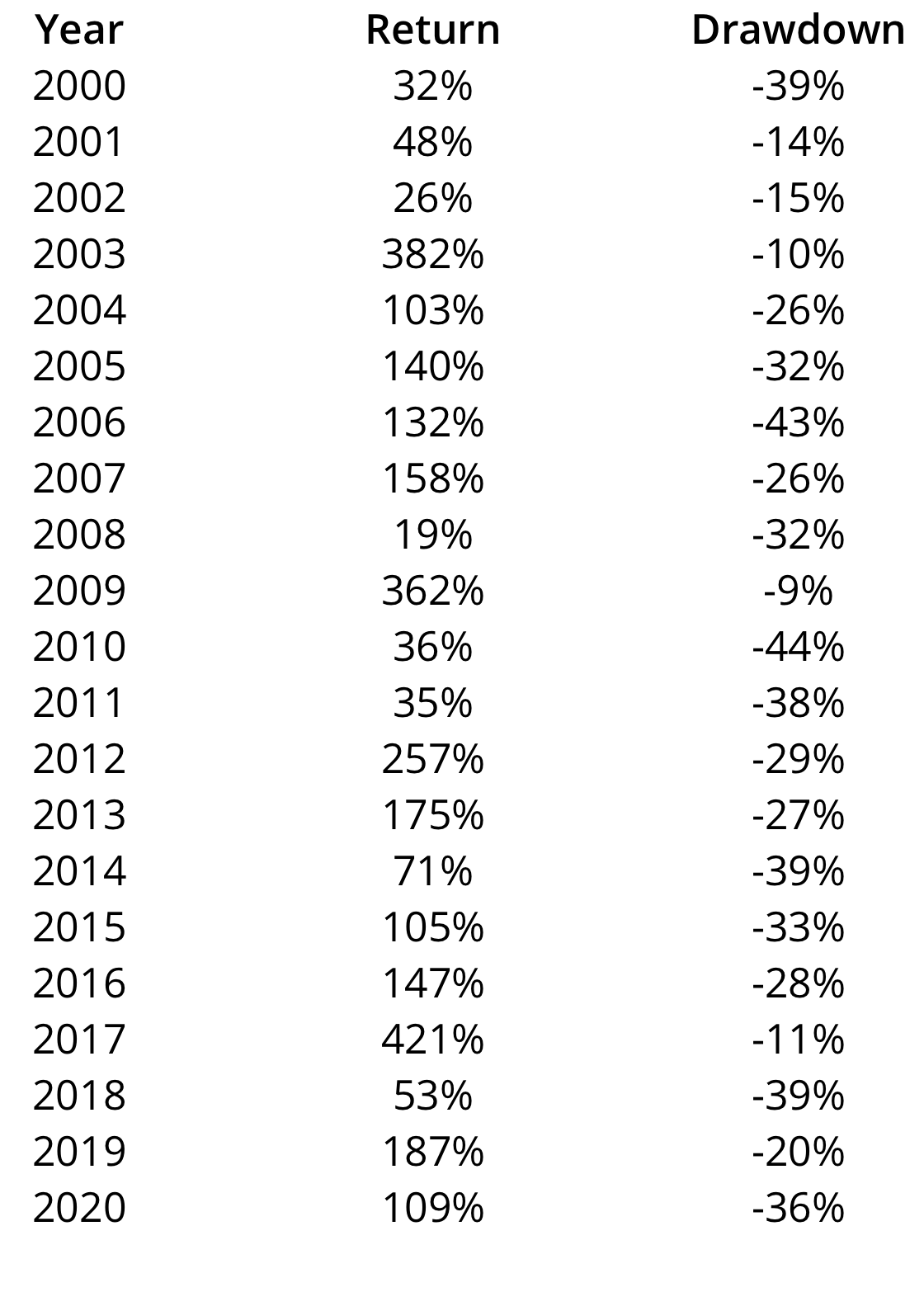 Now if Eric did actually get results like this I would say buy this service now.

I would be spending all my time copying Eric's trades if these were REAL results.

So what are THE REAL RETURNS since Mindful Trader started?

That would be the worst year of the last 20 years by far and it just so happens to be the year he goes live.

So all this talk about back testing is pretty useless.

Because when it comes time to actually making trades the results are WILDLY different.

Who Is Mindful Trader For?

There's a few criteria you MUST meet before you sign up for Mindful Trader.

Here's a look at each one:

If you look on the Mindful Trader website Eric recommends that you have at least $10,000 to follow along with his trades.

But that's not nearly enough.

If you have less than $25,000 in your trading account you can't make more than 3 trades a week.

You'll be getting 3 trades A DAY at Mindful Trader.

You won't really be able to fully participate until you have $25,000.

This is one that's going to take a lot of time to master and involves a lot of research.

You're going to get a watch list of trades and 3 or more trades to make every single day.

That means you'll need to devote time every day to this.

If you're going to learn the strategy and do it yourself you'll need hours a day.

Since you're just getting stock picks I think most people will be able to squeeze the trading into their schedule.

But you will need to set aside time to make the trades.

Eric does have a Youtube channel with the same name.

This channel isn't very active, though.

Eric has a little over 500 subscribers which isn't much and most of the videos have under 1000 views.

Additionally, there hasn't been a new video in over 3 months.

I think Eric uses this channel to convince people to join Mindful Trader.

Basically he makes videos on this channel so he can put them on his Mindful Trader website.

If you're interested in the service it may be worth it to go though all the videos.

But you're not going to learn much about trading there.

What Do Mindful Trader Customers Think?

Here's a look at what I could find from customers:

Most people seemed to really like Eric as a person.

Most people found him helpful and thought he was eager to help them find solutions to their problems.

Swing trading and betting on futures and options can be pretty difficult.

It involves a lot of time and technical analysis to determine when to buy and when to sell.

Eric pretty much does all the work for you.

You get stock picks and then make the trades.

This is something that people were confused about.

You have an option to email Chris and you can chat with him but there's no option to chat with other members.

Most trading programs like this have a chat room or at least a Discord channel so members can talk.

But you don't get that.

This could be a bit of a red flag.. some people take it that Eric doesn't want customers talking about low returns.

When you look at the back testing Mindful Trader looks extremely promising.

Having 100%+ returns every year can change a person's life.

However, the actual returns from the first year of operation haven't even been close to the back testing numbers.

In fact, they'd be the lowest returns of the last 20 years by almost triple

Here's what a customer had to say about this:

At the end of the day you're signing up to get returns, right?

The cost of Mindful Trader is actually quite reasonable (especially if returns improve over the next year).

But Mindful Trader is only $47 per month.

The only downside is there are no refunds.

This isn't that big of a deal because you're not paying the price upfront. So worst case scenario you lose $47 if you don't like the first month.

I fully understand looking at the 20 year back testing and thinking you hit the jackpot.

If you were to invest $10,000 for the last 20 years and have those returns you'd be retired on a beach right now.

The reality is, though, live trading is a different ball game compared to back testing.

Now that Eric is actually putting his concepts and theories into practice he's getting under 10% returns.

My advice is if you're interested in Mindful Trader is give it a year and see if Eric's returns improve.

Or join now and keep expectations low for a while.

Because I doubt you get those back testing returns.

I'd pass on Mindful Trader for now.

The returns just aren't high enough to justify jumping in yet.

There's a lot of stock picking services out there and I've reviewed all the best ones.

To see my favorite (which is affordable to get started with), click below:

There's plenty of stock picking services out there. Click below to read my review of the top one:

Dylan is an expert in investing and passive income. He's from NY and works independently. He created Top Trading Reviews to help investors avoid trading scams.

Please log in again. The login page will open in a new tab. After logging in you can close it and return to this page.